You are here: Home / Politics / Govt / The other Republican candidate's rally 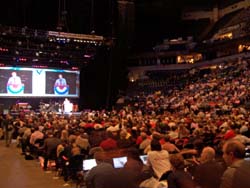 Andrew Kolberg, alternate delegate for the Wisconsin Republicans, says he is a Ron Paul supporter because the Texas Congressman's voting record is the “most conservative” among Presidential candidates.

However the electrical engineer from Madison says his vote is bound to John McCain due to the delegation's popular vote system. He spoke to me at Ron Paul's Rally for the Republic. An non-RNC affiliated event which drew thousands in Minneapolis. The crowd and exhibits included people who want limited government, those who back the gold standard and 9/11 truthers. One exhibitor was pushing literature that claimed the world is rules by shape shifting reptiles.

Kolberg admits there are some “oddballs” among Paul supports but he says you'll find some oddballs everywhere. He says the Republican Presidential Candidate unites all colors, creeds and political parties because everyone wants freedom.