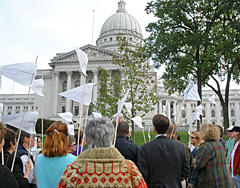 Construction on the capitol square didn't prevent advocates from remembering their loved ones lost to domestic violence.

Every nine seconds, a woman in the United States is beaten, however Dane County District Attorney Brian Blanchard says people who have not been directly exposed to domestic violence don't quite understand it.

Blanchard says it's easy for the abuser to terrorize his victim, because they know each other so well.

Also, we need to stop blaming the victim. Blanchard says abusers can traumatize their victim by threatening to hurt their kids, property, or pets. According to domestic abuse groups, one out of four women will experience domestic abuse in her lifetime. Wisconsin averaged 3.3 domestic violence homicides every month in 2007.