You are here: Home / Politics / Govt / On again, off again in Gableman probe 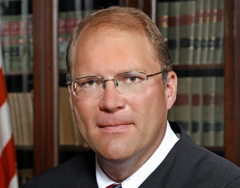 Just two days before the ceremony for his formal investiture, a three judge panel was named Wednesday to hear a misconduct complaint against Wisconsin Supreme Court Justice Michael Gableman. Hours later, the order for the panel was withdrawn without comment.

The panel named earlier Wednesday included appeals court judges Harry Snyder and Ralph Adam Fine and reserve judge Neal Nettesheim, with Snyder as the presiding judge. The committee is to hear the Wisconsin Judicial Commission 's complaint that Gableman violated an ethics rule when his campaign ran a television ad that made misleading claims about his opponent, Justice Louis Butler.

If the panel finds the complaint has merit, it will make a recommendation on Gableman's punishment to his colleagues on the Supreme Court. "The last time the judicial commission, and then the court, acted on a reprimand, it was just that, a reprimand," said Jay Heck with Common Cause, in referring to the 2007 conflict of interest complaint against Justice Annette Ziegler. "It just strikes me that this may be more serious." The Supreme Court reprimanded Ziegler earlier this year for hearing cases involving a bank where her husband sat on the board, while she served as a circuit court judge.

"Defenders of Gableman have said that this (the judicial commission complaint) is an infringement on his constitutional right to free speech," said Heck. "When you're running for the highest court in the land, I think the citizenry has a reasonable expectation that what you're saying is going to be true. And according to the judicial commission complaint, the facts were all wrong , and they were knowingly wrong."

Retired Justice Donald W. Steinmetz will administer the oath of office as Gableman is formally sworn in as a justice on Friday, at 3 p.m. in the Assembly Chamber, located on the second floor of the Capitol's West Wing. Gableman defeated Butler in April, and took the oath of office in a small ceremony in Burnett County on August 1.