You are here: Home / Environment / Conservation / Tips sought on shooting of endagered crane 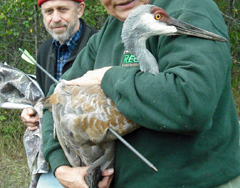 A reward is being offered for information regarding the illegal shooting of a sandhill crane. The U.S. Fish and Wildlife Service says the federally protected bird is believed to have been shot in late August in the vicinity of U.S. Highway 54 and 32nd Street in Wisconsin Rapids. The crane remained in the area and was finally captured last weekend. The arrow was removed and the crane is currently under the care of a rehabilitation facility in Antigo. The arrow was recovered and agents from the Fish and Wildlife Service and the Wisconsin DNR are investigating. They're asking anyone with information regarding the incident call the DNR's Turn-in-Poachers hotline at 1-800-TIP-WDNR. (1-800-847-9367). The injury to the bird is a violation of federal and state wildlife laws.