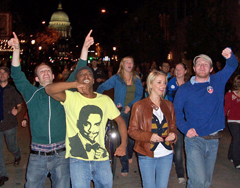 Hundreds of people, most of them UW students, poured onto State Street in downtown Madison for a joyously spontaneous celebration of Sen. Barack Obama's historic election victory. The celebrations included chants of “yes we can,” and “USA” — even singing the national anthem.

Obama swept to a 56% to 43% victory over Sen. John McCain , with 85% of precincts reporting. McCain appeared to have won just 14 of the state's 72 counties. Obama's percentages included 67% of the vote in Milwaukee and Ashland Counties, 77% in Dane County, and 87% in Menominee Co.

All of the state's incumbent members of Congress retained their seats by large margins. The closest House race was in northeastern Wisconsin's 8th Ditrict, where Democrat Steve Kagen beat off the challenge of Republican John Gard, 54% to 46%.

In the state legislature, Democrats appeared to have regained the Assembly majority for the first time in 20 years, picking up five seats.