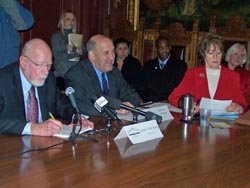 The ten Democrats selected last October to cast Electoral College votes for the president-elect gathered at the Capitol Monday. They cast a unanimous vote for Obama and Vice-president-elect Joe Biden.

Governor Jim Doyle, who was among those voting, says the vote comes after an election that provided a strong statement on who Wisconsin supported for president. Obama won 59 out Wisconsin's 72 counties in November.

Similar ceremonies took place today in states across the nation.