You are here: Home / Legislature / A new session begins 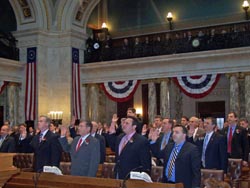 For the first time since 1994, a Democratic Speaker of the state Assembly was sworn in Monday at the Capitol, along with a Democratic majority.

In his inaugural address, Janesville Democrat Mike Sheridan said a $5.4 billion state budget deficit will be among their top priority. He says it's a problem of historic proportions that will require a historic collaboration on the state and federal level to resolve.

Speaker Sheridan says Democrats will also push an economic agenda to help create jobs, which will include funding for worker training programs, helping to develop new jobs in emerging technology, and a focus on buying products made here in Wisconsin.

Sheridan says he wants to work with Republicans on the budget crisis and the many other issues they face. Minority Leader Jeff Fitzgerald (R-Horicon) says they'd like to be a part of the solution, but questions if the Democratic Senate and Governor will be as inclusive. Fitzgerald says he has yet to hear from them on anything related to the budget.

Fitzgerald says he's also very concerned the budget could focus on closing the gap by relying on tax increases on the public, something he says really needs to be avoided while families are struggling financially.

Democrats now have a 52-46 majority in the Assembly, with one independent. The Senate is also controlled by Democrats, who held on to an 18-15 majority after the November election.