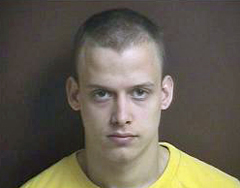 A Tomahawk teen gets life in prison for the robbery and brutal killing of a gas station clerk in March. Lincoln County Judge Glenn Hartley sentenced Derek Domke to life in prison with eligibility for release after 44 years. “That length of time, it is the amount of time the court feels is necessary, given the gravity of this offense,” said Hartley, who criticized Domke for showing no emotion since he was charged in May .

“I can only conclude that this community is threatened by you, if for no other reason than simply your callousness,” Hartley told Domke, who said nothing during his sentencing. While a pre-sentence investigation prepared by the state corrections department recommended life without parole, Hartley said he couldn't't do that. “I'm not sure that I can say that what Mr. Domke is today – in my mind a callous person convicted of murder – is what he would be in 20 years, or 30 years or 50 years. I don't know that.”

Domke admitted stabbing Rochelle Anderson in the back after taking cash, cigarettes and energy drinks from the Zephyr gas station where she worked. “There is certainly blood on your hands,” Hartley told the 18 year-old Domke, who had earlier pleaded guilty to charges of first degree intentional homicide and armed robbery. Domke's attorney had claimed in September that another person had killed Anderson. “You are as responsible for this death and this brutal murder as anyone else could possibly be as a party to the crime.”