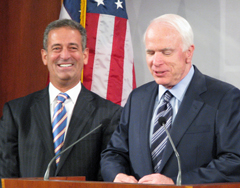 “Our amendment will build on the significant achievements of the 110th Congress, by moving from what has largely been a system designed to dissuade the use of earmarks through disclosure, to one that actually makes it much more difficult to enact them,” said Feingold.

The proposal amends Senate Rules, to allow points of order to be raised against unauthorized appropriations (earmarks), and policy riders in appropriations bills and conference reports in an effort to rein in wasteful pork barrel spending, according to Feingold.

Feingold's amendment also has a disclosure provision, requiring all recipients of federal to disclose any money spent on lobbyists. “It's only fair that the American people know which entities receiving federal funds are spending money to lobby Congress,” says Feingold.

The amendment has a number of cosponsors, including Arizona Republican John McCain and Connecticut Independent Joe Lieberman. A vote is expected later today.