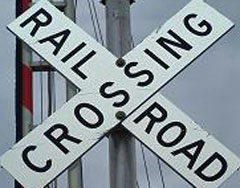 A state lawmaker sees a mixed bag for the future of freight rail in Wisconsin. Greendale Republican state Representative Jeff Stone attended the industry-sponsored GO21 event in Washington this week, where recommendations include tax incentives to improve, equipment and infrastructure.

"Create a tax environment that allows railroads to invest even more money," says Stone . "Right now, there's a potential for those tax credits to create probable a billion more in equipment and infrastructure." Stone says railroads struggled in the 1970s because of overregulation from D.C. He worries that could happen again, which wouldn't be good for the economy of southeast Wisconsin. On a positive note, Stone says millions of federal stimulus dollars proposed for passenger rail will probably benefit freight as well.

"One of the things we're finding about freight rail is that it's just more efficient than almost any other way to move goods around the country," says Stone. "It saves on energy and it's much cleaner, and really had provided a tremendous amount of service, much more than it did back in the 1970s, when it was highly regulated industry."