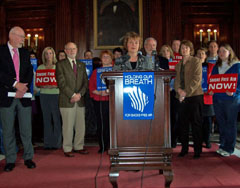 Smoke free supporters are ratcheting up their campaign in support of a statewide workplace smoking ban in Wisconsin. Jari Johnston-Allen is the C-E-O of the American Cancer Society's Midwest Division. She says the new campaign will work to connect Wisconsin residents with their lawmakers, through personal visits, town hall meetings and an interactive website .

"On the website, we will be counting every second Wisconsin waits to go smoke free," says Johnston-Allen. The website will also allow Discontinuities to post videos explaining why the ban is important to them. State Senate President Fred Risser, a major backer of the statewide ban, says his colleagues need to hear from their constituents. "Many of then are concerned, about how their constituents actually feel about this matter," says Risser. "Some are fearful about alienating the tavern league, which has taken a position against smoke free taverns."

With a statewide ban included as part of Governor Jim Doyle's proposed budget, Risser says the issue will be discussed in this legislative session. Johnston-Allen says the Cancer Society believes the campaign "Holding Our Breath for Smoke-Free Air," will prove to be a good investment in helping to make a statewide ban a reality.