You are here: Home / Politics / Govt / Risser: no phase in on smoking ban 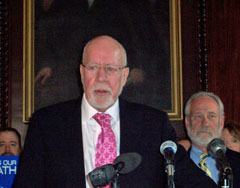 A state Senator says there will be no phase in period for the statewide smoking ban included in the governor's budget. "This particular provision in the budget bill, as it now stands, takes effect sxity days after the budget is passed," said state Senate President Fred Risser, during a Capitol press conference to promote a major advocacy effort for a ban.

"That of course could be debated in the legislature, and the legislature can always change things, but that's how it currently stands, and we're not interested in phasing this in separately," Risser said. "We are taking the position that there should be no phase in period for taverns."

A statewide ban is included as a provision in Governor Jim Doyle's proposed budget. Senate Majority Leader Russ Decker has previously insisted on a phase in period, and Risser was asked if he'd prefer to have Decker at his side. "Not particularly," said Risser, a response which drew laughs in the Senate Parlor. "We'll be talking to him as it goes on. It's in the budget, and we hope to keep it in the budget." If the ban gets taken out of the budget, Risser says he and others are ready with stand-alone legislation.

The press conference promoted a major new statewide effort, " Holding Our Breath for a Smoke-Free Wisconsin ," backed by the American Cancer Society.