You are here: Home / Politics / Govt / Ryan on stimulus: "so much frivolous spending" 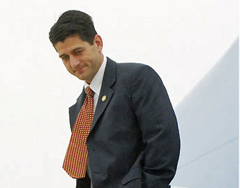 The proposed stimulus plan is still salvageable, according to First District congressman Paul Ryan, who voted against the Democratic proposal, as did all of his House GOP colleagues last week.

The Janesville Republican said President Obama touched on Republican ideas that seemed worth pursuing, but which Democrats failed to allow into the discussion. “He said that after the bills were written, after they were out of committee, and after they'd come to the floor,” said Ryan, who added that the House Rules Committee did not allow him to bring a couple of amendments to the floor.

“There's still a chance to make a difference in this bill,” Ryan told WRJN, while noting the Senate will be in the stimulus spotlight this. “We still have one or two more chapters left to play,” said Ryan. “But there is so much frivolous spending in this bill, it is tough for me to see how they (the Senate) are going to make it that much better, unless they feel like taking about $600 billion in spending out of it.”

Ryan said the House Democrats' version of stimulus pushes government spending, and not much of it right away, while the Republican alternative focuses on business tax cuts to spur economic stimulation. “More than half of all of this spending doesn't even occur until 2011 and beyond, way after the economy is through this problem time,” said Ryan, who favors an approach that does more for business. “You need to help businesses invest in the economy. You need to give businesses incentives and relief to weather the storm, so they can keep jobs and not lay people off.”

Ryan said, referencing negotiations: “my fear is that they're still gonna have all this junk & pork in this bill even after some compromise.”