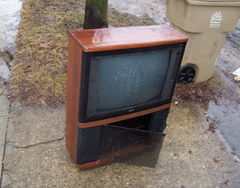 A state lawmaker thinks we can keep old TVs and computers out of Wisconsin's landfills. State Senator Mark Miller  (D-Monona) says it's become easier in the last several years, to recycle consumer electronics such as televisions. “One of the reasons that it was expensive in the past is because the way they engineered the device made it difficult to take part. The products have all been re-engineered, so now it's a lot less expensive to take them apart and recover the valuable materials.”

Those materials include commodities like gold, chromium and other metals. “Before the downturn in the economy, commodity prices were such that you could actually pay for the cost of recycling by reselling the gold . . . and the other materials that were recovered from the recycling process,” says Miller.

Miller's bill requires manufacturers of TVs, computers and printers sold in Wisconsin to assume responsibility for collection and proper disposal — and that doesn't mean shipping them overseas. “The reason that we did not want to go with a landfill ban is because that was the ultimate result,” says Miller. (With) a landfill ban, collectors would collect the stuff, ship it overseas and cause environmental damage elsewhere in the world.”

And just how much of your old television can actually be recycled? “It's over ninety five percent,” says Miller. “The most difficult part of a television set is the cathode ray tube, CRT, because it has lead imbedded in the glass. But we have, right here in Wisconsin, CRT Processing, which is one of the three largest cathode ray tube processing centers in the country.” Some Wisconsin municipalities, like Madison, are already recycling electronics, but Miller says many more are not, and the items end up in landfills.

“I'm very much more optimistic,” of the bill's chances during the current session of the legislature,” says Miller, who has introduced similar legislation before. “It passed overwhelmingly in the Senate last time but was never considered in the Assembly. It has bipartisan support.”