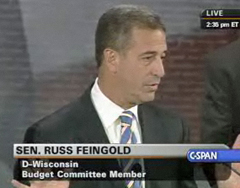 President Barack Obama today called on Congress to approve reforms, which Obama said would not eliminate earmarks, but would force lawmakers to be more transparent about them while reigning in earmarks that benefit the private sector. The president said he would sign a 410 billion dollar omnibus spending bill passed by the Senate and containing more than 85-hundred earmarks.

In a statement , Feingold reiterated his call for aggressive steps to prevent unauthorized earmarks, rather than trying to fine tune a fundamentally flawed process. Feingold and Senator John McCain would make proponents of any unauthorized earmark get 60 votes – a super-majority of the Senate – before it can be part of an appropriations bill.

Feingold, McCain and Wisconsin congressman Paul Ryan are also proposing a presidential line-item veto , to remove “wasteful earmarks” that Feingold says are “snuck into bills, and send them back to Congress to be considered separately.”