You are here: Home / News / Ground Zero for puppy mills 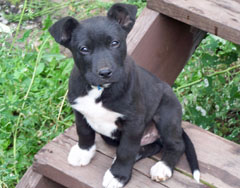 Clark County has become Ground Zero, for those fighting what they feel are inhumane conditions at mass dog breeding operations. The county in central Wisconsin has the most “puppy mills” in the state; it's also home to the state's only dog auction.

Jamie Paige, a news anchor at WQOW-TV in Eau Claire, has been on a personal crusade against mills ever since she adopted a Yorkie from the Clark County Humane Society last year. It turns out the animal was rescued from a mill. “Basically, what it is, is the idea of turning dogs, one after the other,” says Paige. “They (kennel operators) over breed the moms, and they do it for money.”

Some operations are unsanitary. Most don't have ample room for dogs to exercise. The close quarters also lead to rampant disease and other health problems. “One I went to in Clark County last weekend was actually a very clean facility,” says Paige . “But if you go beyond the cleanliness of it, we counted 98 kennels that they had in this facility.” Paige says that particular operator is registered to have 308 adult dog, but each kennel housed 3 or 4 adult dogs.

Paige is working with State Rep. Jeff Smith to try to craft legislation to better regulate the industry. Under Smith's proposal, kennel operators with more than 25 dogs would face state regulation. “They would require that they have running space,” says Paige.”That they wouldn't just be kenneled and housed in a kennel, that they could go outside and be walked.” The bill would also require proper veterinary care for the dogs, which Paige maintains is another major shortcoming in puppy mill operations.