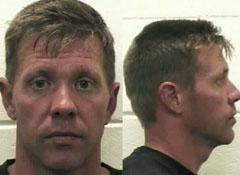 A Michigan man faces life in prison after his conviction in the murders of three teens on the Michigan/Wisconsin border. Scott Johnson used a rifle to open fire on a group of swimmers in the Menominee River in July. The youngest dead was 17, the oldest 19, with one other wounded.

As expected, the 38-year old Johnson entered no contest pleas in Marinette County Court Thursday afternoon. Johnson's attorney Shannon Viel said his client came to the decision to change his plea by himself. "We obviously discussed all possibilities, all options, went through all the information with him," said Viel. "He has been cooperative with the authorities since the beginning. He has maintained a position of honesty. He's very pragmatic, he's very practical. He understands the situation."

The unemployed Army veteran sexually assaulted a 24-year-old woman near the river the day before the murders. Johnson told investigators he knew police would be looking for him after the assault. He planned on killing as many officers as he could, and then wound up shooting the youths when four of them started climbing toward his hiding spot. Johnson admitted he wanted to commit a random shooting for four or five years and stashed weapons in the woods for at least a year in preparation.

He was set for trial on murder charges but pleaded no contest to all counts on Thursday. "We had always hoped he would enter pleas," said Assistant Attorney General Gary Freyberg. "We were prepared to prove this case, it's a very strong case. The police officers from all these jurisdictions did a great job, so we were very confident of our ability to prove it."

Johnson's no contest plea was accepted by Judge Timothy Duket, who found him guilty of all ten charges filed against him. Johnson's sentencing is scheduled for May 21st.