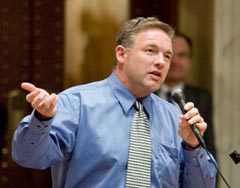 "Since the beginning of the year, 5,700 Wisconsin families have the seen their homes go into foreclosure that's 70 foreclosures a day," says Sheridan.

The Janesville Democrat says the panel is made up of community advocates, bankers, as well as legal and real estate consultants. The goals are to identify solutions to the foreclosure crisis and make legislative recommendations.

Bob Jones, Public Policy Director for the Wisconsin Community Action Program Association, says homeowners are not the only ones in danger but renters may be out on the street as their landlords property is foreclosed upon.

State Representative Leon Young (D-Milwaukee) will chair the bi-partisan task force which is planning public hearings in Western Wisconsin, Milwaukee and the Fox Valley, areas that among the hardest hit by foreclosures.