You are here: Home / Politics / Govt / Bicyclists ride on the Capitol 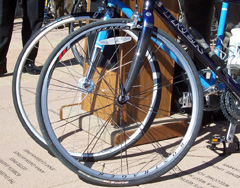 Bicyclists were out in force at the state Capitol on Tuesday, for a 'Ride on the Capitol' sponsored by the Bicycle Federation of Wisconsin. Leaders of the state's bicycling industry joined cyclists for the lobbying effort, and touted their industry's benefits to the state.

Chris Fortune, CEO of Madison based Saris Cycling Group, said 4,000 persons are employed by the industry in Wisconsin, generating more than a billion and a half dollars of economic activity. Fortune said there's a significant opportunity to expand the state's economy through cycling. Trek Bicycle Corporation President, John Burke, said cycling presents a real solution to health problems such as the national epidemic of obesity. “We really need to create an infrastructure so that people can ride bikes, get out of cars, and the health benefits are really extraordinary,” said Burke. “Almost forty percent of car trips are two miles or less. In 1970 – an amazing statistic – fifty percent of people either walked or biked to school. Today that number is less than five percent.” Burke said safe biking routes could encourage more children to ride to school.

David Vogt of the Bicycle Federation of Wisconsin said the lobby effort also sought to push for an end to budget raids on the bike fund. “If you look at neighboring states like Minnesota, we actually have half of the funds,” said Vogt. “Even though bike and pedestrian trips make up nine percent of all trips in Wisconsin, we have only 1.4 percent of our transportation dollars being spent on them.” Vogt said they're asking legislators to support 'complete streets' legislation, which would require all users be taken into account when streets are rebuilt.

Ken Peterson of Middleton knows a thing or two about riding the streets. The 57 year-old Middleton man has being biking as his primary means of transportation for the past five years. ” I figure I could get almost anywhere in the world, if I wanted to, on a bike,” said Peterson. “It is practical. You can ride a bike any time of the year, if you dress for it.”

The cyclists also advocated for safety legislation, specifically a bill to make it illegal to open a car door in front of a bicyclist, which was passed by both the Senate and Assembly on Tuesday.