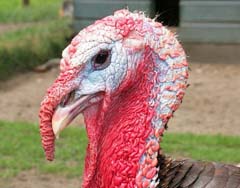 It was an unusual case of breaking and entering Thursday morning in the Village of Mishicot. Heidi Herrera says she and her 5 year-old daughter, Kasandra, were sitting in the living room watching The Price is Right , when they heard a loud smashing noise in the bedroom. Seconds later, a wild turkey charged through the living room.

After putting her daughter and the family dog in a bedroom, Herrera knew she had to take action to get the bird out of her house. With the turkey standing in the kitchen, she managed to get the home's patio and front doors open. The bird left by the front door several minutes later, leaving behind a trail of blood and feathers but little damage, other than a broken doubled paned window in Kasandra's bedroom. Ironically, Herrera had served leftover turkey for breakfast that morning.

Aaron Buchholz, a DNR wildlife biologist, says while wild turkeys have been reported in urban areas, it's uncommon to hear of them getting into homes.