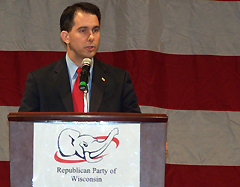 Milwaukee County Executive Scott Walker has put Governor Jim Doyle's track record in the cross hairs. As a contender in the gubernatorial race, Walker reached out to both his socially and fiscally conservative base at the state GOP Convention. He says the Doyle administration's priorities are off and accused the Governor of being more concerned about establishing a same sex registry for couples than updating the state's sexual predator registry. Walker also highlighted Doyle's pro-choice alliances including support for a plan that would allow UW Health to perform second trimester abortions.

The Republican notes Wisconsin's unemployment rate is now higher than the national average and blames the six years of the Doyle administration including Harley Davidson's recent announcement to lay off 400 additional workers. Walker calls this a response to Doyle's tax hike approved earlier this year.

Walker also bashed Jim Doyle for going to Spain to study transit when Thomas Industries was deciding whether to move to Louisiana, where as Louisiana's Governor became personally involved which ultimately led to almost 300 jobs leaving Sheboygan.

Two others who've mentioned plans for a Republican run at the Governor's mansion include former US Representative Mark Nuemann and business owner Mark Todd .