You are here: Home / Legislature / Lawmakers urged to finish up budget work 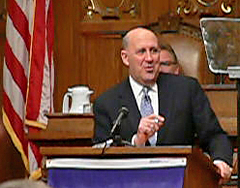 Time is running out for lawmakers to reach an agreement on the state budget.

Governor Jim Doyle says lawmakers are cutting it close, when it comes to finishing work on the state's $63 billion budget plan. He says they need to get it to his desk before July 1, or else the state risks losing a significant amount of Medicaid funding.

Work is going on behind the scenes to finalize the plan and Doyle says his office is playing a role in the process, and he'll do whatever he can to move the work along. The Senate and Assembly need to resolve differences between their versions of the bill.

After the Legislature approves their final version of the bill, Doyle says he'll need a few days to go over the measure and to consider any potential vetoes.

With Democrats in control of the Legislature, some critics have said the budget is being written in secret. The governor says everybody knows what's in the bills passed by the two house, so there are no secrets.