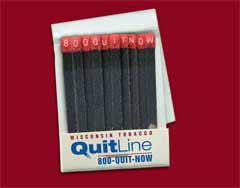 Wisconsin smokers will pay another 75 cents in taxes, under terms of a provision in the state budget, but they won't necessarily see the benefits of that revenue when they decide they want help to quit smoking. Budget negotiators have dealt another cut to Wisconsin's stop smoking efforts.

Maureen Busalacchi, Executive Director of Smoke Free Wisconsin , says budget conferees, working in secret, cut another $5 million from the state's programs to help smokers kick the habit. "We've been looking through a lot of documents and details, and if you look at the major income sources to the state, you see corporate taxes, and at roughly the same amount, you see cigarette taxes." Busalacchi says that makes the entire cut 55 percent, not the 40 percent in earlier versions of the budget.

It's unlikely that this further raid on tobacco programs can be reversed by anything short of a veto by the governor. But Busalacchi wants the public to know what occurred behind closed doors. "They need to tell their lawmakers, that's not ho we do things in this state. We actually help people who have a problem."

Smoke Free Wisconsin believes drastic cuts to tobacco control programs will result in higher youth smoking rates, and that getting a handle on health care costs become more difficult without investing in programs that help people to quit smoking. Busalacchi says the 75 cent increase on cigarette taxes without a program to combat smoking is just a tax increase — and a regressive one at that, because a third of all low-income people are smokers.