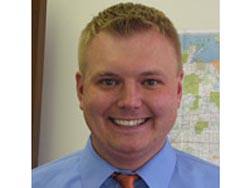 The new head of the Democratic Party of Wisconsin is young, but he's hoping that will work to the advantage of the party.

Mike Tate, a 30-year-old political activist, was elected Chairman of the DPW over the weekend. He is the youngest chair of any state Democrat or Republican Party in the nation. Despite his youth, Tate says he's been working in politics for over 12 years and is excited to to fill the role.

Tate replaces Joe Wineke, who served two terms as party chairman. During that time, the state saw Democrats gain control of both chambers of the Legislature and increased their presence in Congress. Tate admits he has some big shoes to fill, but he's excited about the challenge.

Goals Tate hopes to focus on include increasing the role of grass roots campaigning within the party, having Democratic candidates running in each Legislative district in 2010, and help Governor Doyle and Senator Russ Feingold win re-election.

Tate also wants to increase the reach of the party using so-called new media, such as blogs, Twitter, and online video. He says the Democratic Party is already making good use of those technologies, which he thinks are vital to reaching out to a new generation of young voters.