You are here: Home / Recreation / Entertainment / Polo, no ponies, no grass 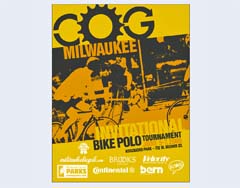 Two wheeled polo players have converged on Milwaukee this weekend. Jacob Newborn, who captains the Milwaukee Bike Polo Club, says they expect a high level of competition at the Cog Magazine Bike Polo Invitational. “We're going to have over twenty teams from New York, Boston, Portland, Seattle. The best teams from across North America.”

If you think polo on bikes sounds like a sport for healthy twenty-somethings, you're pretty much right, although Newborn says there are some exceptions: “there's a 65 year-old guy who plays in New York, there's a 13 year-old kid who plays in Chicago,” Newborn says.

Along with the absence of horses, there's another element that sets this version of bike polo apart – the absence of grass. While bike polo has been played on grass for a century or more, Newborn says this hard court version originated in Seattle about ten years ago, and has rapidly grown in popularity. The Milwaukee club has been in existence for four years.

The sport is still something of an underground, unorganized enterprise, according to Newborn, who notes that rules and regulations vary from city to city. “Media is just now starting to catch on, and sponsorships are just now starting to grow,” says Newborn. “We're still in the early stages of he sport gaining in popularity.”

There's no cash for winning the tournament, but companies in the bicycle industry have ponied up for prizes, and Newborn say each member of the winning team will take home about one thousand dollars worth of merchandise. The tournament runs through Sunday at Milwaukee's Kosciuszko Park .