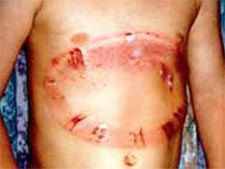 As the temps get higher, more people will seek comfort in swimming pools, but are they safe?

A new federal law requires pool operators nationwide to upgrade their drain covers so that people won't be injured – or killed. The problem is, the grates required to bring pools and spas into compliance with the law aren't readily available.

"At the beginning of the season we certainly didn't have the grates available to us, but they are starting to come online now slowly."

Tim Gantz is president and co-owner of Noah's Ark , the country's largest water park, located in Wisconsin Dells. He says Noah's Ark is in its 31st season with over 12-million guests and safety has always been its number one priority.

Peter Simon, project developer with Neuman Pools in Beaver Dam, is currently testing the pool drain grates at Noah's Ark. He explains it's a long process before manufacturers would have grates ready for use.

"So when you look at that entire time period for all of that to have taken place … manufacturers to conceive of, pass tank tests, mass produce, get them into the industry, and then approvals for installation from the state and then get them installed. There was no way all that was going to happen in the one year that the federal law allowed for compliance with this federal act."

Simon says manufacturers in the grating industry first focused on how to make the grates meet the anti-entrapment criteria for the mainstream, including pools at condominiums, hotels, and athletic clubs, before working on large drain covers for water parks, which are just beginning to be produced and tested.

The Wisconsin Commerce Department says there are over 3,700 licensed basins in the Badger State. Simon estimates that somewhere between 20-to-30-percent are compliant right now.

Gantz says Noah's Ark will likely be compliant by next season, due to lack of grates available. He adds, it's expensive to upgrade the drain covers.

"It is going to be costly. I've heard tens of thousands of dollars all the way up to 100-plus thousand dollars to maybe a couple hundred thousand dollars. It just depends on how the testing goes."

Gantz, past chairman of the World Water Park association, says the federal government won't be shutting people down as long as there's a "good faith" effort to become compliant.

A Consumer Product Safety Commission report shows from 1999 to 2008 there were 83 pool and spa entrapments and 11 deaths in the country.

NOTE: The Virginia Graeme Baker Pool and Spa Safety Act was passed in December of 2007, requiring public pools and spas to have anti-entrapment grates over the drains to prevent people from being sucked in. All public pools were supposed to be compliant by December of 2008. The 7-year-old girl after whom the law was named died in 2002 after being sucked into a hot tub drain.