You are here: Home / News / Bicycle friendly only goes so far 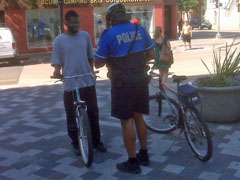 The city has obtained a reputation as one of the most bicycle friendly in the nation. But that doesn't mean you can do just anything on a bike in Madison. Riding on a sidewalk crowded with pedestrians, for example, is a no no.

Madison cops are cracking down on two wheeled lawbreakers. On State Street, officer Derrick Jones – working from the seat of bike himself – issued a ticket to a rider who blew through a red light – missing a vehicle by a few feet. “That's something that puts people in jeopardy of being hit” says Jones. “I'm sure that for every fatality that we've had in the city, we've had hundreds of near misses, because bicyclists are just not obeying the traffic laws that they should.”

Jones says reactions to the tickets he issues to scofflaw cyclists tend to two extremes. “One of just total disgust and unbelief, 'like I can't believe you're giving me a ticket, are you serious, isn't there something better for you to do?' to people who thank me for making them aware that yeah, when you're on a bike and on the roadway, you do have to obey the traffic laws.”

Jones and another officer were working State Street on bikes Wednesday, while two others worked from their squad cars. The effort was not one sided: earlier in the week, officers focused on making sure drivers were obeying the laws regarding cyclists and pedestrians.