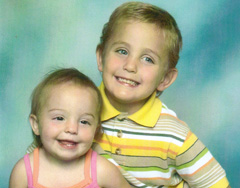 The father of the boy pulled from a burning SUV thanks everyone for saving his son's life.

James Harper says there are so many people to thank — hospital staff, firefighters, neighbors — all helping to rescue his little boy from the fiery SUV in Milwaukee.

"I'm sorry, I'm a little, I'm trying to hold it together, he's my little boy … I just want to thank everybody — the citizens of Milwaukee — for helping us. It's just so wonderful, there are angels all around us. And I'd like to thank everybody."

At a news conference at Children's Hospital in Wauwatosa, Pediatric surgeon David Gourlay, says four-year-old D.J. Harper is in serious but stable condition. He says D.J. will remain in ICU for the next few weeks, followed by several months in rehab as he recovers from burns over 20% of his body.

D.J.s 32-year-old mother, Angela Baldessari of Kingsport Tennessee, and baby sister, Beverly Harper, escaped without serious injury Sunday afternoon from the SUV, which had been engulfed in flames after hitting a tree and flipping over. Dr. Gourlay says he expects DJ to have a full recovery, but his biggest risk is infection.

"What's challenging with burns, especially deep burns that are extensive like D.J.'s, is the functional, the cosmetic and the psychological recovery from that."

Working with child psychologists will be a very important part of D.J.'s rehabilitation, along with getting psychological care for the rest of the family. Dr. Gourlay says the outcome would have been much different had it not been for the quick action of the passersby.