You are here: Home / Recreation / Entertainment / Great Circus Parade expected to be huge 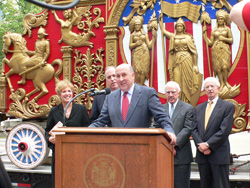 Over half a million people are expected in Milwaukee for the Great Circus Parade .

A couple of authentic, wood-carved circus wagons make a brief stop in the state's capitol city, as they travel from the Circus World Museum in Baraboo to Milwaukee for the big parade. Museum Executive Director Steve Freese says this year's parade is expected to be the largest parade they've ever produced, as they celebrate Circus World's 50th anniversary.

"We at Circus World are absolutely delighted to be able to stage for the people of Wisconsin what will most likely be the third-largest parade in America this year. Only the Rose Bowl Parade and Macy's Thanksgiving Day parade are likely to be larger."

Freese says the Great Circus Parade will feature over 130 units, including over 50 horse-drawn wagons, as it rolls through the streets of Milwaukee on Sunday the 12th. Over 500-thousand people are expected for the event. Governor Jim Doyle says he'll participate in the parade, wearing period clothing.

"It has been six years without the Great Circus Parade in Milwaukee … and it has been missed during that period of time."

Doyle calls the parade a "Wisconsin tradition," which is good for the state economy. It's expected to generate $27-million in spending from residents and tourists.