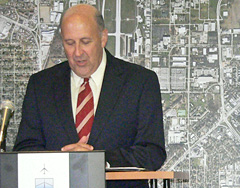 The state of Wisconsin signs a deal with a Spanish train manufacturer.

“And not only will Wisconsin residents be able to enjoy state-of-the-art passenger rail, we will also create jobs for hard-working families.”

Train parts would be manufactured in Spain, but assembled and maintained here in Wisconsin facilities, which Doyle says would initially create about 80 jobs. The contract allows for the option to buy two additional train sets if the state gets money from the federal government's American Recovery and Reinvestment Act to expand rail service going 110 miles per hour from Milwaukee to Madison, with its ultimate destination being the Twin Cities.

“And the link of Chicago-Milwaukee-Madison and the Twin Cities is one that will bring enomorous longterm econonmic growth to this region.”

Eight-billion dollars in federal stimulus money has been allocated for high-speed rail projects in the U.S. Doyle says this contract makes the passenger rail project shovel-ready and well-positioned to get that federal money.

The eventual locations of the assembly and maintenance facilities have not yet been determined, but Talgo has already scouted areas in Janesville and Milwaukee and expect to make a decision within the next six to nine months.