You are here: Home / Titletown Report / Packers get deal done with Matthews 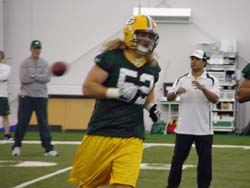 At least one of the Green Bay Packers two first round draft picks will be on the field when training camp workouts start on Saturday. The Packers have come to terms on a new deal with linebacker Clay Matthews.

The deal is reportedly for five years and is worth $10-million, with opportunities to see the deal climb as high as $13.275 million according to the Milwaukee Journal Sentinel.

Matthews is the second of the Packers first round picks, taken 26th overall out of USC. He’s expected to compete for a starting job.

The Packers now have 7 of their 8 draft picks in the fold. The teams other first rounder, B.J. Raji (9th overall) remains unsigned.