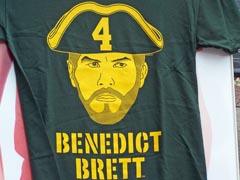 Brett Favre a Viking? For one Wisconsin t-shirt store, it’s all good. Isaac Lenz is store manager at Sconnie Nation in Madison, home of the ‘We’ll Never Forget You, Brent’ t-shirt.

“The day has finally come, they’re flying off the shelves now, we’re selling more today than any single day previous to this,” says Lenz.

One customer posted to the store’s Facebook page that the ‘Brent’ shirt is passive-aggressive. Lenz says they do have a shirt that’s a little more bitter. “That is our ‘Benedict Brett’ t-shirt. That’s a little more harsh, you could say,” he explains. “That one never really sold that well, but we’ll see now. As of today, I saw quite a few orders on-line for that one.”

So how does Lenz, a Green Bay native, feel about the news of Favre signing with the Vikings? “I still like Brett Favre. I like to see him play, I wanted him to play this year. I don’t really care where, but wherever he plays I want to beat him, obviously, because I’m team first. Packers.”

Still, Lenz wishes Favre good luck this year: the better he does, the more shirts Sconnie Nation will sell.