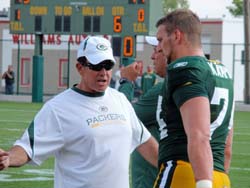 The Packers special teams units were a mess last season and Shawn Slocum has taken over as the teams Special Teams Coordinator to fix that problem.

Throw in a couple of changes on the offensive line and a brand new attitude preaching physical toughness and the Packers are ready to open the season against the Chicago Bears on Sunday night.

The offense is pretty much in tact from last season.  Aaron Rodgers has a year of starting under his belt and should be even better than a year ago, and the wide receiver group continues to be among the best in football.  The emergence of TE Jermichael Finley will help bring another weapon to the mix and changes on the offensive line will promote a more dominant running game.

The only thing the Packers offense didn’t do well last season was score early.  Starting fast has been a point of emphasis during the off-season.  On opening drives last year, the Packers scored three times, 1 touchdown and 2 field goals.  For a team that ranked 5th overall in points scored (419), they certainly didn’t do it early.  Of the 419 points scored, only 61 came in the first quarter, which tied for 20th in the league in 1st quarter points.  The Packers think they have the problem taken care of.  In 13 offensive possessions during the preseason, the #1 offense has scored 9 touchdowns.

The real changes come on defense though.  In the new 3-4 scheme, the Packers starters gave up just 13 points and forced five turnovers in 13 possessions.  Everyone on the field is a pass rusher in Dom Capers scheme, which makes reading the defense difficult for opposing offenses.

It’s sometimes dangerous to look at what happens in the preseason and translate it into regular season predictions.  But the change in scheme looks to be for real, so much so that it’s hard to think the Packers won’t make a drastic improvement from their 6-10 mark of a year ago. 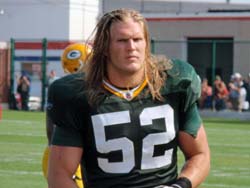 The Packers should get help from both first round draft picks this year.  B.J. Raji will get plenty of snaps at both defensive end and nose tackle, while linebacker Clay Matthews (pictured), who stepped into a starters job early in camp before suffering a hamstring injury, is healthy again and will get opportunities to contribute as well.

The Packers lost perhaps their best defensive player for the final 12-games last season when Cullen Jenkins went down with a pectoral injury.  He’s healthy again and ready to assume his role as one one of the dominating players on the Packers defensive front.  Johnny Jolly also looks good  and appears ready to be a bigger force at defensive end.

Last year, the Packers ranked 26th in the NFL in rushing defense and that’s an area that will have to improve if the Packers are going to be a better football team this season.  It’s a risk and reward defensive approach, but Dom Capers reminded me during training camp that take/aways and sacks aren’t the No. 1 measuring unit in determining a good defense.  Points allowed is still the #1 statistic out there and that’s what this defense will eventually be measured on.

The Packers have their holes on both sides of the ball, but I think those concerns are considerably less than a year ago.  The Packers also lost games on special teams last season.  That’s been a point of emphasis  this season and new coordinator Shawn Slocum is confident that the results will be better.

Preseason is always the most difficult measuring stick.  We’ve seen teams go 4-0 in the preseason, like the Lions did last year, and then wind up doing nothing in the regular season.  But I think this Packers team is for real.  I think their schedule is favorable early and I think they’ll find a way to win at least 11 games this season.