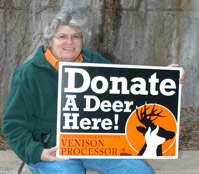 The deer kill is down this hunting season, and that means venison donations will be down.

Officially, the amount of venison donated to food pantries is expected to be less than in previous years, anecdotally speaking, many hunters continue to donate … but a little closer to home. So says Laurie Fike, Department of Natural Resources Deer Donation program coordinator.

“What we know from last year is that with the downturn in the economy a lot of hunters are donating deer to neighbors and family.”

The nine-day gun deer hunt that ended Sunday in Wisconsin harvested almost 30% fewer animals than last year — the smallest deer kill since 1982. Fike says the agency is tabulating the numbers now to get a better idea of how the dismal hunt affected the number of donations.

Fike stresses the importance of donated deer meat, recalling a story of some hunters from Wood County who received venison when they really needed it, and later returned the favor.

“They were out of work in the 2007 season and they really appreciated getting the meat at their local pantry and they let me know last year that they had their grandparents watch their children so that they could hunt specifically for the deer donation program.”

Wisconsin’s Venison Donation Program collected nearly 70,000 deer since the program began ten years ago. Those animals were processed into over 3.1 million pounds of ground venison for thousands of families statewide.

Wisconsin’s Venison Donation Program is a partnership between local charitable organizations, counties, the DNR, meat processors and hunters. The DNR says this effort has provided high quality protein to thousands of families over the years.