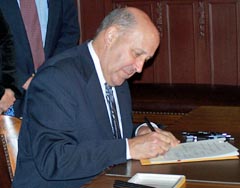 Governor Jim Doyle has signed legislation that allows candidates for the state’s high court to access publicly-funded grants to pay for their campaigns. Doyle says the measure will help to restore confidence in the judicial system, following several recent elections that have seen very negative attacks coming from candidates.

Candidates who receive funding would have to agree to a $400,000 spending limit.

Doyle says court races are different than campaigns for other political offices, and allowing public financing will help candidates remain impartial. He says voters shouldn’t have to question whether a judge is making decisions in cases based on who contributed to their campaign.

Critics say the impact of the bill will be limited, since it doesn’t stop third party groups from spending money on issue ads that can influence elections. Doyle admits it’s a problem lawmakers still need to address.