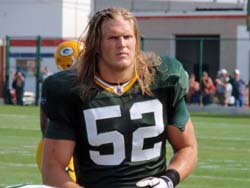 Matthews saw action in all 16 games, including 13 starts, and finished the season with 58 tackles, a franchise rookie-record 10 sacks, three fumble recoveries, once forced fumble, six passes defensed and a defensive touchdown.

Matthews will be joined on the NFC squad by S Nick Collins, QB Aaron Rodgers and CB Charles Woodson.