You are here: Home / Politics / Govt / A call for reform 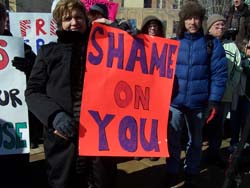 The January decision by the high court struck down a decades-old law designed to limit the influence of big business and unions on elections. Mike McCabe of the Wisconsin Democracy Campaign says that radical interpretation of the First Amendment must not be allowed to stand, because it allows public offices to be bought and sold.

McCabe was joined by about a hundred protestors Tuesday outside the state Capitol to rally against the decision. He says the ruling turns corporations into the dominant voice during elections, and drowns out the public.

They want a Constitutional amendment that would reverse the Supreme Court’s decision.

In Wisconsin, McCabe and others are calling on the state Legislature to pass a bill that would require special interest groups to disclose who funds their campaign ads. The measure is awaiting action in the state Assembly.