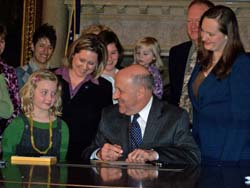 Baby bottles and sippy cups for children will have to be BPA-free, under legislation signed into law Wednesday by the Governor.

The bill bans the selling or making in Wisconsin of bottles and cups for children under the age of three that contain bisphenol-A, or BPA. The chemical is commonly used to make clear plastic stronger, but Governor Jim Doyle says it has raised some health concerns in numerous studies. The chemical has been linked to causing delays in human growth and development.

Wisconsin is one of a handful of states that have moved to ban the chemical. Doyle expects others to follow, with even Congress considering a ban on the federal level.

Even though many stores are no longer selling bottles containing BPA, the Governor says it’s an important move because it encourages manufacturers to stop using the chemical. He says it’s unlikely companies will want to make two different products for states with or without a ban.