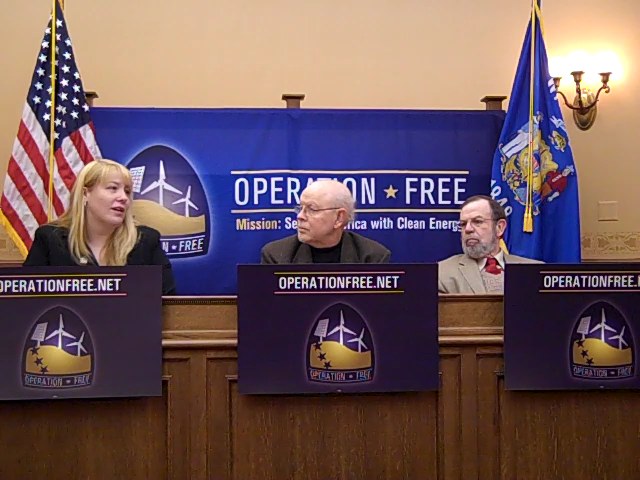 Will the U.S. military lead the way to greener technologies? That argument was made at the Capitol Wednesday by members of Operation Free, a coalition of veterans urging the U.S. to decrease dependence on fossil fuels. Robin Eckstine is a native of Neenah who started thinking about the issue while driving trucks in Iraq. “I wondered to myself as we were hauling fuel and water everyday, if we had less trips outside the gate, that would mean less risk to American lives, less risk to my life,” Eckstine said. “Why weren’t we being just a little more energy efficient, and solving this problem?”

Vietnam vet Larry Larry Delashmit of Fayettville, Arkansas said the military has a long “logistics tail” that’s almost totally dependent on foreign oil. “Just think of the cost and the equipment, we have to guard these convoys. Millions of dollars to get a gallon of gas to a little base in Afghanistan. And the military is actively trying to find alternatives to this.”

And how about this for green technology? Iraq War veteran Chris Miller said that later this year, the Navy plans to test fly an F/A 18 Super Hornet powered by biofuel. “There was no detectable difference in performance in that engine,” Miller said, adding that the plane has been dubbed the “Green Hornet.”

The members of  Operation Free are on national bus tour stopped by the Capitol Wednesday to meet with lawmakers and the media.