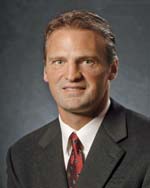 Osiecki has been Wisconsin’s top assistant for the past six years, helping the Badgers to the 2006 NCAA title and the 2010 NCAA championship game.  Prior to joining the Badgers, Osiecki was head coach and general manager of the Green Bay Gamblers in the United States Hockey League for seven seasons.  He said it’s difficult leaving his alma mater.

Osiecki has been a part of NCAA (both as a player and coach), junior hockey, international and professional championship teams.

At Wisconsin, Osiecki was the recruiting coordinator and defensive coach under Mike Eaves.  Now he’s the head coach at Ohio State and he called the Buckeyes program a sleeping Giant.

Osiecki is the second coach to leave the UW.  Kevin Patrick left to take a head coaching job in the USHL.

Osiecki is a three-year letterwinner on defense for Wisconsin from 1987-90.  He served as an assistant captain for the 1990 NCAA Championship team.  He was selected in the 1987 NHL Entry Draft by the Calgary Flames.  He enjoyed a six-year career, including stints with the Flames, Ottawa Senators, Winnipeg Jets and the Minnesota North Stars, before a wrist injury cut his career short.