You are here: Home / News / Debating a National Day of Prayer 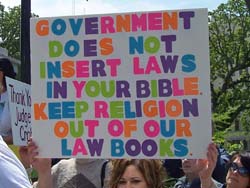 Boosted by a recent federal court ruling that the practice of declaring a National Day of Prayer is unconstitutional, members of the Madison-based Freedom From Religion Foundation celebrated the victory on the state Capitol steps Thursday.

FFRF co-president Dan Barker says the people of this country do not “bow down and submit to a sovereign” or a “spook in the sky.” He called on around 100 supporters of efforts to outlaw the practice to continue the fight.

Barker says people should be free to make their own choices about what to believe, without government involvement or declarations. 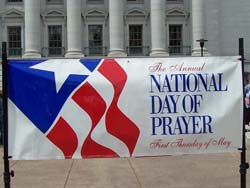 The first Thursday in May is set aside each year to observe a National Day of Prayer, which also brought out a different demonstration on the other side of the Capitol Square. Pastor Bill Bartz of Monona was among several spiritual leaders who called for keeping God a part of America and the importance of prayer in all aspects of daily life.

Governor Doyle did sign a proclamation this year declaring Thursday a National Day of Prayer in Wisconsin.