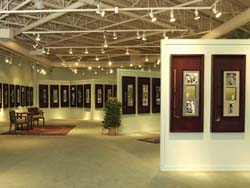 The PGA Championship History Exhibit has returned to Wisconsin and opens today at The Shops at Woodlake Kohler, located in the Village of Kohler, Wisconsin.

Golf enthusiasts and history lovers will be able to take a free tour of some of the rarest artifacts and memorabilia which uncover the tradition of the PGA Championship and its past 91 Champions.

Also on display will be the PGA Championship’s coveted Wanamaker Trophy.

The PGA Championship perennially features the strongest field in golf and is considered one of the largest sporting events in the world.

For more information on the PGA Championship exhibit, go to: www.destinationkohler.com