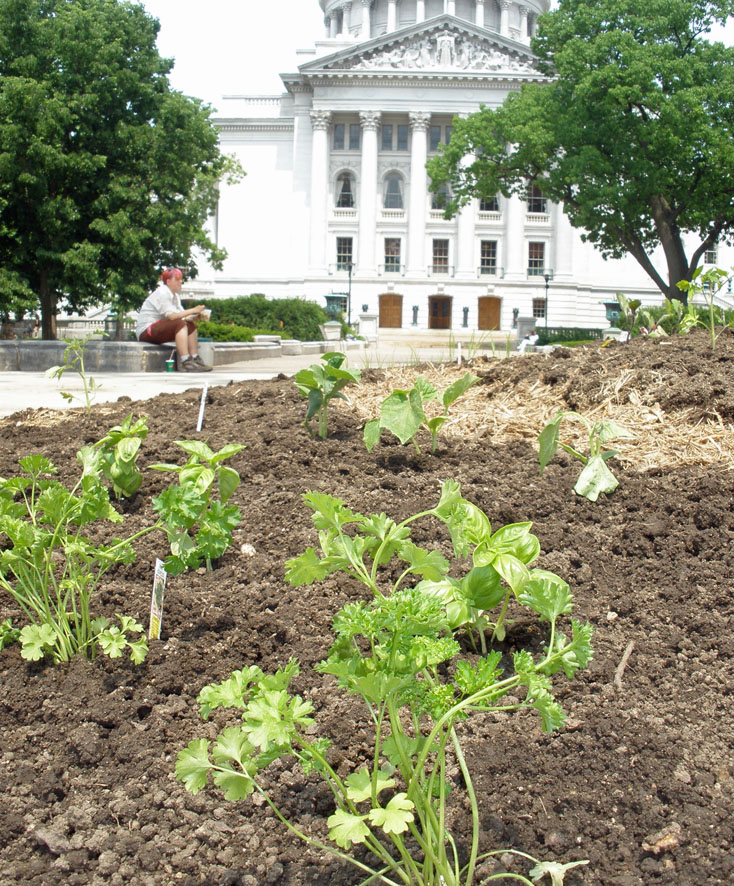 The state capitol is home to a new vegetable garden.

It’s for demonstration and educational purposes, but it’s also quite functional. “Tomatoes, we have basil and parsley, and cucumbers, lettuce over there, potatoes, peppers, cabbage, kale, broccoli.”

Megan Cain is Program Manager for Madison Farm Works. Her group designs, installs, and maintains vegetable gardens at private homes, businesses and schools. So, a logical next step is to plant in a circle bed on the capitol square.

Longtime State Senator Fred Risser calls it a pilot project. The Madison Democrat is Chairman of the State Capitol and Executive Residence Board, or SCERB,which overseas those places. His committee OK’d the garden idea, saying the group “made a very good presentation.”

“I’m very impressed at the work they’ve done here. They’ll have a chance to show us what they can do in the next six months. If it works out I suspect it’ll become an annual thing.”

What about the potential for vandals? “Well that’s certainly the most popular question today, is ‘what about people vandalizing the garden?'” Cain adds, “We’re certainly hoping that’s not going to happen, so that it can be there for everybody to see.” But if a portion of it does get ruined, she says they’ll fix it.

Cain says, however, if a little kid were curious about the taste of a cherry tomato, it would be OK to try it.

Madison FarmWorks plans to donate the food to the Goodman food pantry. As for the cost of the garden …

“There is no cost to the state of Wisconsin. In fact, actually the state saves a little money because they don’t have to garden the area themselves.”

There hasn’t been a vegetable garden on the capitol grounds as far back as Risser can recall — and that’s a long time. The longest serving legislator in the nation says the garden sets a good example for other communities across the state and the country.