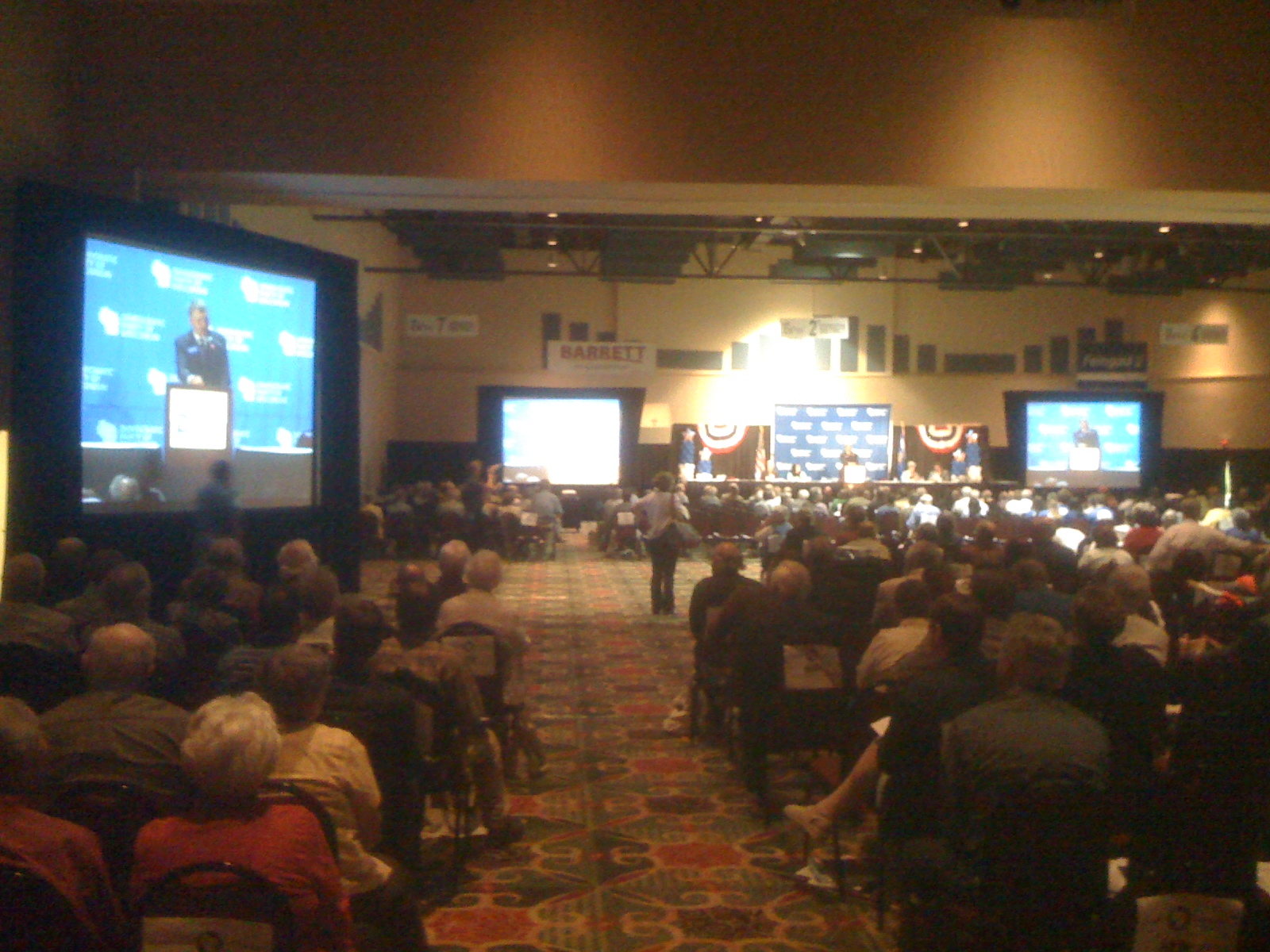 Democrats from all over Wisconsin gathered Friday night in Middleton for their annual convention. Among the speakers, long time Congressman Dave Obey who included in his accomplishments of 40 years in office, the economy recovery package. He fired back at Republican critics who cited deficit spending on the massive stimulus bill. The Wausau Democrat claims Republican policies on taxation and the war has wiped out the Clinton surplus while establishing nine trillion dollars in debt in the coming decade, “and yet they oppose spending one-tenth that amount in the short term in order to rebuild job opportunities.”

As House Appropriations Chairman, Obey said he’s “damn proud” of the work he did on the bill. His last statement was not a word but notes from his harmonica which the lawmaker harped away at for several minutes.

A candidate running for Obey’s seat, State Senator Julie Lassa, touted her record as a fighter. She cited her facing off against chemical companies with her BPA free act, a bill signed into law that bans the chemical from children’s drinking cups. In addition Lassa talked of spearheading efforts to boost jobs and the economy through work on Accelerate Wisconsin and the CORE Jobs Act.

Assembly Speaker Mike Sheridan listed numerous legislative victories that he says would’ve only happened under Democratic majority. While calling Republicans the party of “no,” the Janesville lawmaker posed questions to the delegates: would Republicans have passed contraceptive equity, banned phosphorus and mercury, or cracked down on drunk driving?

Earlier in the evening, Lt .Governor Barbara Lawton warned Democrats not to get complacent in their achievements. She told Dems they “must insist on serious ideas for economic recovery” from the candidates. She said it’s government’s job to aid in economic development with 21st century infrastructure things such as broadband access and education innovation.

A common theme among the speakers was the severe economic blow Barack Obama faced as incoming President. DPW Chair Mike Tate said Obama is bringing the US out of the economic disaster that Bush created. The federal lawmakers that spoke, including Congressmen Ron Kind and Steve Kagen as well as Congresswomen Tammy Baldwin and Gwen Moore, all praised the health care reform act.

Among speeches the one with the heaviest campaign feel belonged to Senator Russ Feingold, who took shots Republican challenger Ron Johnson. Although the upcoming primary will officially decide the GOP challenger, Republican delegates endorsed Johnson at their convention weeks ago. Feingold took issue with the millionaire businessman’s comments about the oil industry in lieu of the Gulf oil spill.

“He (Johnson) also has said big oil is not evil and get this, ‘this is not the time to be beating on these guys quite honestly.’ Are you kidding me? Can you think of a better time to be beating up on the oil industry?” Feingold said he’s always taken a strong stance against bank bailouts but Johnson has kept quiet about the issue.

The evening was capped off with Governor Jim Doyle and keynote speaker DNC Chairman Tim Kaine.