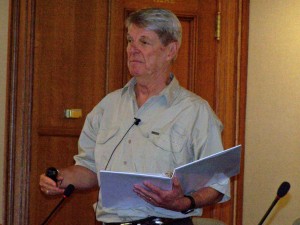 An expert on US-Mexico border security brings his message to the state Capitol, amid protests from immigrant rights advocates.

Wisconsin native Gary Meinert spends most of the year in Arizona examining border security issues. One of many areas he’s watched closely is the effectiveness of fences along the border with Mexico in deterring immigrants and criminals from illegally crossing into the US.

Meinert offered a presentation on his research at the Capitol Thursday, at an event sponsored by Wisconsin TEA Party groups.

The event resulted in a protest by about a dozen advocates for immigrant rights. Christine Neumann-Ortiz with Voices de la Frontera says locking up the border is the wrong approach and Meinert’s presentation ignores the issues driving people to cross the borders. Neumann-Ortiz says the U.S. needs to focus on making it easier for immigrants to become legal citizens, not putting up barriers that only endanger lives.