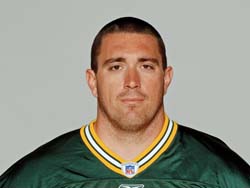 will get the start at left guard on opening day against the Philadelphia Eagles.  McCarthy opened up the competition by allowing rookie first round pick Bryan Bulaga the opportunity to compete for the job.  But while Bulaga had to deal with a hip flexor injury and some missed practice time, Colledge stayed on the field and won the competition with a solid training camp.

This is the second or third time that Colledge has been challenged with his job on the line.  He was asked if it’s getting tiring.

College is a part of a starting unit that didn’t allow a sack in over 4-quarters of play during the preseason.  The decision means Colledge and Bulaga won’t be alternating reps at guard anymore and Colledge will be able to focus his time on getting ready for the start of the regular season on Sept. 12th at Philadelphia.

Colledge was asked what he did to win the job when he first heard the job was up for grabs.

AUDIO: Daryn Colledge on what he did when he found out he was in a job battle :15