You are here: Home / News / Is Fido a distraction for drivers? 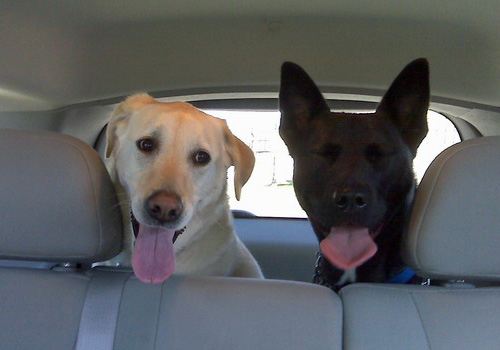 Seeing a dog sitting in a driver’s lap or hanging its head out the window is a fairly common sight on the road, but a new study suggests many people are letting it distract them while they’re behind the wheel.

About two-thirds of drivers admit to being distracted when traveling with a dog in the car, according to a study from AAA. Those distractions range from having a dog sitting on their lap to just petting or playing with the pooch.

Beth Mosher with AAA-Wisconsin says allowing a dog to roam freely in the car can put the safety of both you and your pet at risk. She says slamming on the brakes at 50 miles an hour is enough to turn a 10 pound dog into a dangerous projectile, throwing it around the car with up to 500 pounds of force. It only takes a sudden stop at 30 miles an hour to throw an 80 pound dog around with 2,400 pounds of force.

Mosher says drivers should consider crating their dog or using a harness that attaches to a seat belt, so they’re kept just as safe as any human member of the family. The study found only about 17-percent of drivers use any sort of restraint system when traveling with a dog in the car.