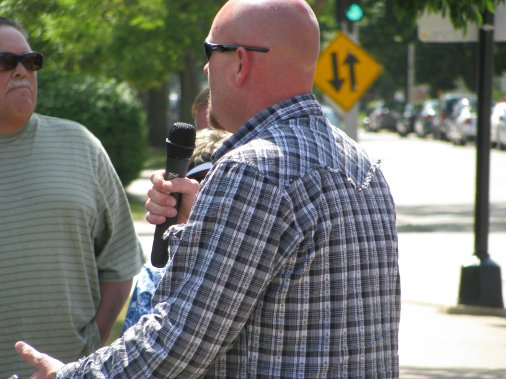 Tea Party movement or voter rallying cry; it was hard to tell the difference when the National Spending Revolt Bus Tour rolled into Fond du Lac Wednesday afternoon. The message about out-of-control spending was there, but speakers also focused on making your vote count in both September and the mid-term elections in November.

The more than 100 gathered at Veterans Park were there to hear from speakers like Joe Wurzelbacher who became known as “Joe the Plumber” after confronting then presidential candidate Barack Obama on the campaign trail. Wurzelbacher says when Obama talked about “spreading the wealth” it really struck the wrong chord in a lot of Americans.

Milwaukee Pastor David King said he’s glad Obama was elected president because it made a lot of people finally pay attention to what is going on.

Linda Hansen is the Executive Director of the Wisconsin Prosperity Network. She says the tour has been well attended. Gordon Magee of Minocqua performed a rallying song he wrote for the Tea Party movement “The Tea Is About To Get Wet.” One lone protester carried a sign saying, “Teabaggers Go to Somalia. Less taxes, less government.”