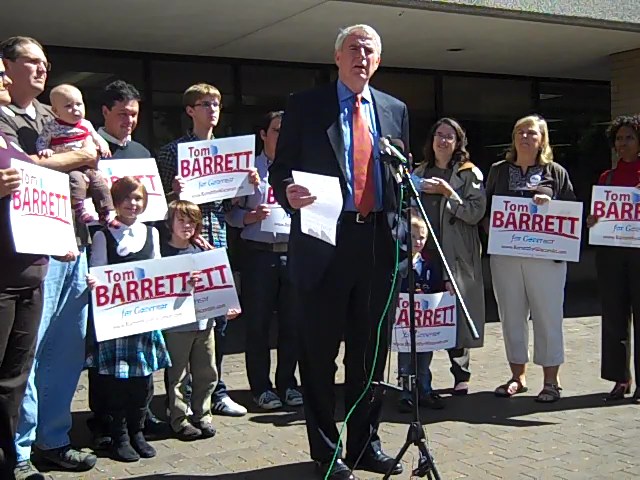 Tom Barrett wants changes in the way Wisconsin funds public schools. A pair of proposals for K-through-12 education from the Milwaukee mayor and Democratic candidate for governor. First, Barrett wants a funding floor for school districts faced with declining enrollments. “If you have a situation where you’ve had 27 seventh graders and four families move away, and you suddenly have 23 seventh graders, you still have to have the teacher, you still have to have the heating costs, you still have to have the transportation costs, even though you’ve lost that state funding,” Barrett explained during a press conference in Madison on Wednesday. “We’re going to deal with that situation, so that you do not see dramatic cuts in districts because of declining enrollments. Just this last school year we probably had 100 districts that faced cuts because of declining enrollments.”

Second, Barett wants to take another factor into account when the state doles out education funding: income. Barrett says that because the state formula for distributing aid is based on property values, districts with expensive vacation properties but low per capita incomes are at a disadvantage. “Because of the property values in those areas, what you’re seeing is . . . an impact on the amount of aid that they receive from the state. So as a result of that you’ve got the children who live in that area . . . not getting the amount of aid from the state that they need to have. We’re going to have income levels, not just property values, be a factor in determining state funding for school districts.”

Barrett, who says he hasn’t crunched the numbers on the impact of either proposal, was also asked about the potential for restoring the state’s commitment to fund two-thirds of the cost of public education if he’s elected. “I would love to stand before you and say that my first budget is going to get us back to two-thirds funding,” he said. “I think that will be difficult to do . . . given the finances that we have in the state. My first priority is to make sure it doesn’t slip from where it is right now. And that even will be a battle, given where we are in the finances of the state.”

The Milwaukee mayor will face either Milwaukee County Executive Scott Walker or former congressman Mark Neumann in the November general election, pending the outcome of next Tuesday’s Republican primary.