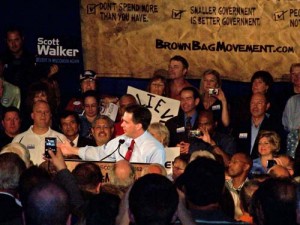 Wisconsin voters have named Scott Walker the Republican nominee in the race for governor.

With nearly 57-percent of the vote, Walker won the GOP nomination in Tuesday’s primary election over former Congressman Mark Neumann. Walker thanked supporters rallying in Milwaukee for preparing him for what’s to come, noting that the primary has tested and made his campaign ready to take on the “liberals in Madison.”

During his victory speech, the Milwaukee County Executive also reached out to Republicans who supported Neumann. He says the two candidates really are a lot alike in their goals of putting government back in the hands of the people.

The two candidates will now face each other in November’s general election.